Hit enter to search or ESC to close
Uncategorized

By OrvietoCinemaFest23 October 2020 No Comments

After the great success received at the 77th Venice International Film Festival, on Friday 25th September, one week before the Festival, we hosted the first screening of the film  “Omelia Contadina” by the director Alice Rohrwacher and the French artist JR to support the struggle of small farmers and citizens of the Alfina plateau.

“Last autumn, during a walk on the border between Umbria, Lazio and Tuscany, I told my friend and artist JR my concerns about the destruction of the agricultural landscape, violated by the proliferation of intensive monocultures that are shaping entire territories. As the daughter of a beekeeper, I used to tell him about the great death of insects, and the struggles of small farmers trying to stem this river in full of speculation, subsidies, pesticides. While we were looking at the landscape marked by uninterrupted rows of stones, we told ourselves that it looked like a cemetery. On the way back we decided: if it looks like a cemetery, we must celebrate a funeral. But let it be a funeral full of life! This is how the project of the “Omelia Contadina” was born: a cinematic action with which, through our work, we wanted to support the struggle of small farmers and citizens of the Alfina plateau. A funeral, but also a hymn of hope dedicated to all those who keep us alive day after day, producing our food”. – Alice Rohrwacher

In a community everyone contributes as much as they can to support the needs of all. Alice Rohrwacher is part of a community of men and women who live in a large border territory between Lazio, Umbria and Tuscany, linked by relationships of trust and friendship, bond with the Earth, defense of the territory, availability of healthy food.

She is the daughter of a beekeeper, is at home, and deeply loves her territory. Together with her friend and artist JR, she has lent her art to one of the issues and battles that this community carries on: the proliferation of intensive monocultures of hazelnuts that are transforming the landscape and risking to poison our land and our water. 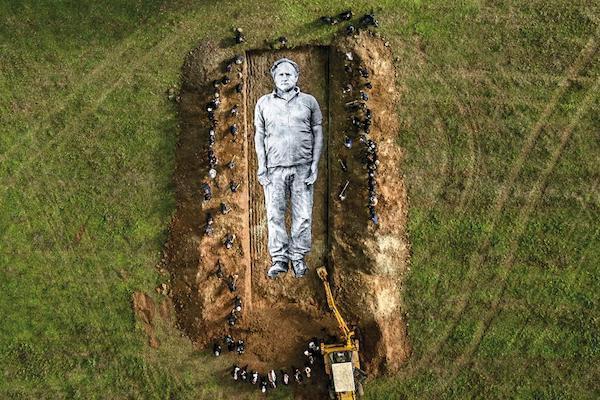